Home / World / Trump and NATO chief call each other 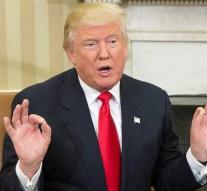 - Donald Trump and NATO chief Jens Stoltenberg agree that the Western military alliance NATO remains important. The two have called each Friday and discussed the security situation, including the threat of terrorism, and on the size of defense spending. They also agree that a lot of progress in the spread of expenditure, but there is still more work to do in that area, NATO reported.

Trump, in January the successor to US President Barack Obama, in his election campaign, noted that the United States a lot of money lost to the safety of others in the far abroad, while other self only piecemeal contributions.

Trump's comments have led to unrest in Europe. This is largely for safety depends on the dominated by the Americans and largely paid NATO alliance.