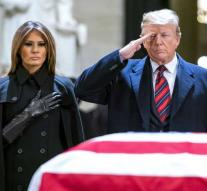 washington - The body of former US President George H.W. Bush is laid out in the Capitol in Washington. Members of the Senate and the House of Representatives will commemorate him there. President Trump and his wife Melania came to pay the last honor. Vice-president Mike Pence will also give a speech.

Bush's body was transferred from Houston to Washington with US presidential plane Air Force One. Bush's body was received with military tribute at the Capitol, the seat of the US Congress. After the ceremony with the deputies in the Capitol, civilians can say goodbye to the 41st president of the US until Wednesday, who reigned from 1989 to 1993.