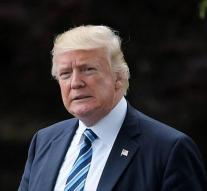 washington/ankara - President Donald Trump called the Emmanuel Macron's French President to congratulate him on Monday. Macron won the presidential election with two thirds of the votes cast on Sunday.

Macron was also called by Turkish President Erdogan on Monday. The Turkish leader believes that Macron's victory gives more hope for the future of the European Union, according to sources in the government of Erdogan. Macron and Erdogan have agreed to meet each other later this month in Brussels. There will be a NATO Summit on 24 and 25 May, including Macron, Trump and Erdogan.

Their Russian ambassador Putin has called on Macron to set aside the 'mutual mistrust'. He did this in a congratulatory telegram on Monday. Premier Mark Rutte already congratulated Macron on his victory. According to Rutte, 'the French people have made a clear progressive and pro-European choice. '