Home / World / Trump and Clinton for the first clash 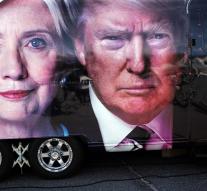 hempstead - Donald Trump and Hillary Clinton stand tonight for the first opposed. Follow the debate over our correspondent Herman Stam.

The two candidates are neck-and-neck in the polls before the election for the presidency. Clinton knows 46 percent of Americans behind, Trump can count on 44 percent.