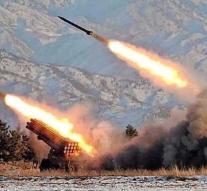 tokio - Japanese Prime Minister Shinzo Abe and US President Donald Trump want to keep pressure on North Korea on its core program. The two agreed that Wednesday night in a telephone conversation that lasted an hour, reports the newspaper The Japan Times.

The two countries want Pyongyang to seek dialogue and give up its core program. 'Dialogue for dialogue would be useless,' Abe said afterwards.

The conversation followed the rapprochement between North and South Korea during the Winter Games in Pyeongchang. Japan fears that thaw between the two countries on the peninsula will damage diplomatic and economic pressure on Pyongyang.

South Korea, Japan and the US have agreed to jointly raise against North Korea, but the fear now exists that Seoul itself will seek the dialogue. South Korean President Moon Jae-in has received an invitation to visit North Korean leader Kim Jong-un.