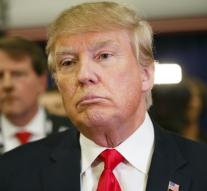 - A day after the warm words of Russian President Vladimir Putin addressed to Donald Trump, the US presidential candidate has expressed a flattering. 'It is a great honor to receive such a friendly compliment from a man who is so greatly respected in his own country and beyond,' the colorful Republican told ABC News.

Putin had Trump Thursday as very flamboyant and talented described. He is an absolute leader in the election race , Putin added. Both men hope that if Trump wins the US elections, the ties between the two countries could be significantly strengthened.