Home / World / 'Trump against will and thanks on trip' 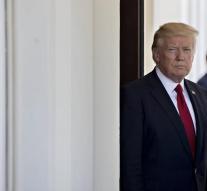 washington - President Donald Trump begins his first foreign trip on Friday. According to American media, he hates traveling and ceremonies. And the growing problems in Washington go as a heavy baggage, analyze media in the US.

Trump would be angry that he's on his way for at least nine days. Among the 'guilty' of the plan, a long journey is his son-in-law, Jared Kushner. He carries out his father in law along important religious centers and Belgium.

Trump arrives in Saudi Arabia on Saturday, May 20th, where Islam comes from. He is received in Riyadh by King Salman. Trump would sell the Saudi for 90 billion euros of weapons. On Sunday, Trump speaks separately with the leaders of Arab states along the Persian Gulf, the six countries of the GCC (Gulf Cooperation Council). After that, a summit with dozens of leaders of Islamic countries follows, with Trump speaking about Islam and extremism.

Monday 22 May, Trump arrives in Israel. If its plane flies directly, it is the first direct flight from Saudi Arabia to the Jewish state. Trump puts a wreath in the holocaust museum Yad Vashem. Later in the day he is dining with Prime Minister Netanyahu. Tuesday, May 23, Trump will visit Bethlehem with Palestinian President Mahmoud Abbas. He then returns to Jerusalem, including praying at the Wailing Wall.

Wednesday is Trump in Vatican City at Pope Franciscus. The two leaders talk about migration and the climate. In Rome, Trump is then received by Italian President Sergio Mattarella.

Thursday, May 25, Belgian King Filip receives the US president. Trump then visits the EU headquarters in Brussels and lunchtime with the new French president Emmanuel Macron. Trump then brings a visit to NATO that holds a summit. Sicily is the last stop. There he will attend the G7 Summit on 26 and 27 May.