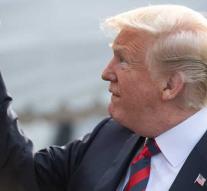 Trump can probably no longer compete for the Peace Prize this year. The deadline for giving up candidates expired in January. Although the American leader had already been nominated for the Peace Prize of 2018, this entry was later canceled. The so-called sender turned out to know nothing. Only a limited number of people, such as politicians and academics, can give up candidates.

The president already has a nomination for 2019 in his pocket. His fellow party members have contacted the Norwegian Nobel Committee to put their leader forward. Trump reacted last month with a nod to the question of whether he thinks he deserves the award. 'Everyone thinks that, but I would never claim it,' he joked.