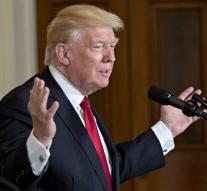 washington - With a short denial, US President Donald Trump responded to a press conference in the White House on Thursday about the possible interference of Russia in the presidential elections of 2016.

'No, no-next question,' he said, asking whether he would have put pressure on FBI director James Comey to stop investigating the ties between his ex-adviser Michael Flynn and Russia. The president called it 'utterly ridiculous' to think he would do something that could lead to his deposition. Earlier this day, he had complained to Twitter about 'the biggest witch hunt on a politician in America in history. '

According to Trump, there has been no cooperation between his campaign team with the Russians. The president finds that the issue divided the country.