Home / World / Trucker gets lost with cargo chips for four days, but does not eat anything 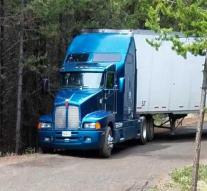 portland - An American truck driver has shown an iron discipline by not eating his load of crisps during the four days he was lost.

The 22-year-old trucker Jacob Cartwright lost his way in the remote woods in the north of the state of Oregon after he entered a wrong address in his route planner. When he wanted to turn on one of the narrow mountain roads, his truck got stuck in the muddy verge.

Cartwright decided to seek help and ran for about 12 hours a day for four days. Mobile telephony is not possible in the vast forests. He spent the cold nights in his truck.

After wandering through the woods for days, the trucker managed to reach Interstate 84, where he arranged a lift to his employer. His boss posted a jubilant Facebook message: 'Jacob was found alive!'

According to the authorities, Cartwright was severely dehydrated. Also a part of his right foot got frozen. The trucker said to an agent that he could not make it to touch the chips. 'That's stuff from someone else, you'll stay away. '