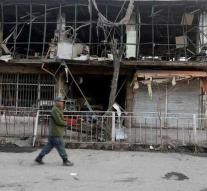 kabul - The Afghan authorities seized a vehicle full of explosives in the capital Kabul. According to the NDS intelligence service, it is at least two tons of explosives.

'Terrorists wanted to transfer the vehicle and the explosives to the province of Parwan', quoted news channel TOLO from a statement of the service. The explosive was reportedly intended for the production of suicide vests and bombs.

Extremists have recently made many victims in the Afghan capital. For example, more than a hundred people were killed last month when an ambulance full of explosives exploded in a busy street. There were also dozens of deaths when terrorists stormed the Intercontinental Hotel.