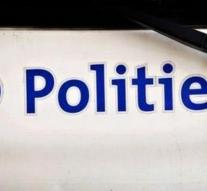 brussels - A truck was dumped on Friday morning due to unknown cause of a bridge near Libramont in the Belgian province of Luxembourg. The vehicle ended up on the track, which means that no train traffic is possible between Libramont and Bertrix.

The Belgian railway company NMBS reported that a train could still slow down on time for the truck. The approximately thirty passengers in the train were not injured as far as they know.

No announcements have been made about the condition of the truck driver. It would be a military vehicle.