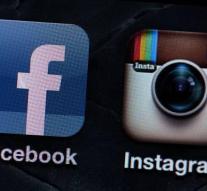 menlo park - Instagram and Facebook camped on Saturday afternoon between 15:00 and 17:00 with a major failure. This reports the downdetector.com malfunction site, which contains thousands of reports from users who encountered malfunction.

Facebook has not responded. In the meanwhile, the websites and apps work almost everywhere.