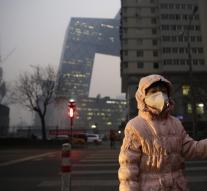 - The Chinese authorities have for the first time Monday in the capital, Beijing announced the highest smog alarm. The state news agency Xinhua reported that this ' red alert ' runs from Tuesday 07:00 am to noon (12:00 pm) on Thursday.

It means among other things that schools remain closed and there are no construction work in the open air. Throughout northern and parts of central China suffer from smog.

The National Meteorological Center and the City of Beijing have already warned at the weekend against the serious air pollution under the current conditions. They talked then about the second highest, the alarm phase (orange), which, for example schools, no activity is allowed to take outside and may cause the construction dust during work.