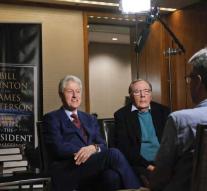 - The president who is missing in the thriller of Bill Clinton and James Patterson is not Donald Trump. It is also not Hillary Clinton, as in a quick attempt to rewrite history. The bestseller writer and the former president in President went missing for fiction, with Jonathan Duncan as his protagonist.

If the Democrats had only one Duncan in 2016, by the way. A Trump might have made it down to this young fifties, who had just become a widower. Duncan is the opposite of Trump; not only young, but also sporty, a loving father, a hero from the Gulf War, human, but nevertheless a cool frog with leadership qualities.

The publisher promised in advance that there would be details in the book that only a president can know. Assuming that author Patterson has taken care of the storyline and the build-up of tension, these details are then Clinton's contribution. It starts right away: President Duncan prepares for the interrogation by a special investigation committee, impeachment threatens (a deposition procedure).

What has Jon Duncan done to get this procedure on his pants? In any case, he did not, like Clinton at the time, mess with a trainee; there is really a serious problem now, the writers want to emphasize. Duncan has telephoned the leader of the (fictitious) terrorist movement Sons or Jihad, and refuses to explain why.

Before the questioning can actually begin, that is what the book owes its title to. The president gets lost. At least, it seems. His faithful- the chief of staff, the vice president, the CIA director, security guards- do know where he is. He tries in the deepest secret to prevent the United States from turning into a third world country. An unprecedented cyber attack has been announced and Duncan has only a few days to eliminate the virus that is causing the disaster. And then there is also a 'mole' within his own ranks.

It is a tried-and-tested thriller concept that also makes President a true pageturn, provided you do not pay too much attention to bizarre motifs or gaps in the timeline. The extra attraction is in the references to the real world; the spread of fake news via social media during the elections, the Russians who are guilty of hacking computer systems (and are not trusted by Jon Duncan), or the alliance with Israel and Germany. And then there are the side paths in which Duncan breathes his views on the racial problems, or on how hopeless it is to stop the arms lobby.

The film rights of President missing have already been sold. Now that- after the # MeToo scandal about Kevin Spacey- we have to set it without House of Cards, hopefully we will soon have a nice alternative in the cinema.