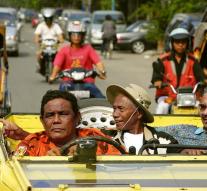 - An international tribunal of judges, the mass killings in Indonesia condemned in 1965 as crimes against humanity. The United States, Great Britain and Australia would be complicit in the genocide.

According rapportvan the International People's Tribunal 1965 (IPT 1965) there are between 400 000 and 500 000 people were killed by the military because they suspected ties would have with the Communist Party. The cover-up surrounding the murder makes it difficult to give an exact number. Some estimates go up to a million deaths.

Last November were heard over twenty witnesses in The Hague. Some did it anonymously to protect their identity.


The judges found evidence for multiple charges including inhuman, brutal torture, not just imprisonment and forced labor that may resulted in slavery. Also, there was systematic sexual violence, according to the report, instead, political persecution, and there are thousands of people disappeared that would not sufficiently support the Suharto dictatorship.

The tribunal advises the government to apologize to victims and survivors and to investigate the crimes. It would also victims should receive compensation.

However, the Indonesian government has announced to not respond to the recommendations of the tribunal because it has its own legal system and will solve its own problems. A third party can not dictate what to do to the country, said Minister Luhut Pandjaitan. 'Our country is a great nation. We recognize this problem and will it our way, to solve the basis of universal values, 'he said, according to CNN.


According to the report, were the United States, Britain and Australia are fully aware of the events in Indonesia and are in more or less complicit. Thus, America would have supported the Indonesian army and worked the British and the Australians involved in false propaganda of the army.

The massacre in 1965 followed a failed coup and the assassination of a number of generals. General Suharto blamed the communists unleashed a witch hunt and seized power himself.

The mass killings were the subject of the acclaimed documentary The act of killing. In the film playing perpetrators of the massacre more than forty years later after their own atrocities.

1965 IPT was founded in 2014 by Indonesian exiles, human rights activists and researchers because they had no confidence in the national research in Indonesia.