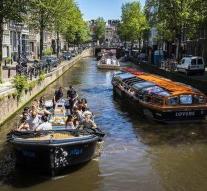 amsterdam - Amsterdam dodges shipwrecked by the failed licensing system for cruise boats. They get a consent for consent, reports The Parole on the basis of Alderman Udo Kock (water).

Amsterdam wanted to introduce a new licensing system, but it was rejected by the Council of State. Therefore, Kock decided temporarily not to issue new licenses. That was good news for the big shipping companies, who already had permits, but they were starting out the launchers. Now they can still get water.

According to Kock, the proof of consent is a temporary solution, valid until the end of the year. After that, a new policy will be introduced, but if it fails, the shipping companies will be longer tolerated.