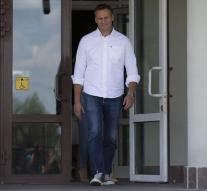 moscow - The process must be done against the Russian opposition politician Alexei Navalny. The Russian Supreme Court overturned his conviction Wednesday and referred the case back to a lower court. The Kremlin critic himself is not happy with the verdict. ' They should annul the whole thing, '' he said.

Navalny sees the decision as an attempt to stop his political activities. The ruling of the court follows a critical judgment of the European Court of Human Rights (ECHR), which concluded earlier this year came when Navalny was denied a fair trial.

The opposition leader and his brother were sentenced in 2013 for embezzlement of the equivalent of 440 000. He spoke of a political process and denied all the allegations.

Eventually Navalny did not have the cell; He received five years probation. But his conviction he could not ask more candidates for election. His supporters hope he will now be allowed to participate again.