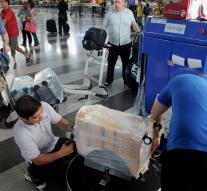 - Dozens of travelers would be extorted in the Philippines by security staff at airports. They hid according to CNN ammunition in the luggage of unsuspecting people, who then had to give large sums of money.

At the Philippine police this year would already have been done dozens of times declaration of such extortion, which are known locally as ' Tanım bala '. According to government officials, the matter is still under investigation.

The authorities have already come up with measures to prevent more people suddenly faced with bullets in their luggage. So travelers can leave their belongings wrapping terminals at airports.