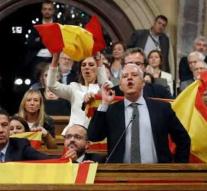 barcelona - The percentage of Catalans who are in favor of secession from Spain is declining sharply according to opinion pollers of the Catalan government. The Catalonian Center of Opini Studies (CEO) states that now 40.8 percent of respondents want independence and 53.9 percent want to stay with Spain.

At the start of the current political crisis, 48.7 percent were still in favor of independence. The crisis erupted in early October following the illegal and chaotic attempt by the then Catalan regional government to separate the region from Spain. That government was deposed and the region is now governed by the central government in Madrid.