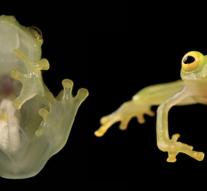 quito - Scientists have discovered a very special frog in the jungle of Ecuador. The skin on the abdomen and breast of the tiny animal is translucent, which makes the organs of the frog visible.

The animal, which has been awarded the scientific name Hyalinobatrachium yaku, belongs to the glass makers- known for a transparent skin around the stomach. But the newly discovered species is still a lot more special. The frog, which is about two centimeters, was spotted in three different places in the South American country. Scientists suspect that the beast occurs in more places, such as in neighboring Peru.

No matter how many frogs these frogs are. The frogs hardly see themselves and hide themselves from being green.