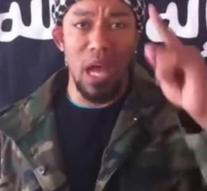 atlanta - An American translator who went to Syria with FBI's highest reliability statement in 2014, married a internationally renowned Islamic State member. That has revealed CNN on Monday, referring to a federal court report.

Daniele Greene was contracted to assist in research into the trade and walk of the rationalized German Denis Cuspert. In his country, that fame enjoyed rapper Deso Dogg, in Syria as Abu Talha al-Almani, Osama bin Laden fan. Instead of playing interpreter Greene lied to the FBI and went to her new husband to warn him that he was being searched.

Greene got a few weeks later sorry for her hasty marriage and fled. Back in the US she was blamed and got two years in prison. She was released last year. Her story, never brought out, remains painful for the US intelligence service, which aims to eradicate IS sympathizers in the country with root and branch. What improvements have been made now, CNN was not told by the FBI.