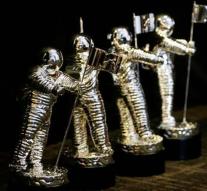 Four soldiers and two veterans from the Army, Air Force and Navy joined the representatives of the American LHBTI organizations GLAAD and SPARTA on the red carpet. 'It does not matter who you are, our country is safe only if the best and smartest people work in our armed forces,' said Captain Jennifer Peace, stressing that the army must be open to anyone who wants to serve and defend his country. The soldiers were welcomed by the present audience with loud applause.

It's not the first time that the VMAs are used to make a political statement. In 2016, singer Beyoncé took a group of women who were lost to their sons due to violent police action. In 2010, Lady Gaga had a group of homosexual soldiers who were fired from the army because of the ban on gays in the American armed forces.

'MTV indeed invited the transgender soldiers and we would be honored when they come,' said Christopher McCarthy earlier to CNN. 'Every patriarch who carries out his life for our freedom and equality is a hero for MTV and youth everywhere,' said McCarthy.