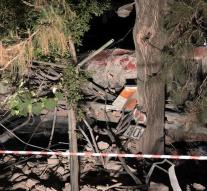 athens - In a train crash near the Greek port city of Thessaloniki, at least two dead and seven injured people have been injured on Saturday night. That informs the Greek authorities.

An intercity train from the capital Athens to Thessaloniki with five wagons escaped by unknown cause at Adendro. The train stopped at a house. At the place of the accident, rescue services were massively present.

On the train there were about seventy people. The engineer is in critical condition, the Greek train company Trainose, who earlier stated that four people were killed. That number was later revised down by the national crisis service.