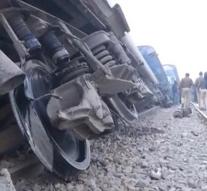 - Certainly sixty people on Sunday (local time) killed by a train accident in India. At least fourteen wagons derailed according to Indian media in the northern state of Uttar Pradesh.

The police said to have already recovered sixty bodies, but the death toll is possible even further. The derailed wagons sit according to a senior railway official ' even fix many passengers. '

The authorities have deployed more than thirty ambulances to transfer all the victims to hospitals in the area. So far, according to Indian media already one hundred and fifty wounded removed from the train.

It is still unclear which derailed wagons. Sources told The Times of India that the crash was caused by damage to the track. Research should determine whether that is true.

Indian Railways carry 20 million passengers annually, but have a bad reputation in the field of security. Thus came last year at another train accident in Uttar Pradesh 39 people dead.