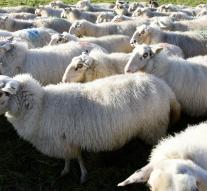 bremen - When crossing a level crossing in Bremen is a sheep caught in a train. Thus died twenty sheep and the sheepdog, the German police reported Monday. A number of other sheep were so badly injured that she had to vet euthanized.

The sixty shepherd wanted his two hundred sheep cross the railway line, but some of the animals suddenly stopped. Shortly thereafter closed the gates. The dog failed timely to drive off the animals of the track and was also seized.