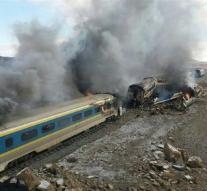 tehran - The number of dead has risen as a result of the train crash Friday in Iran to 45. More than a hundred people were injured.

A passenger train was at the station Semnan east of the capital Tehran on another train, and some cars caught fire. According to the Red Crescent aid organization, the identification of the victims require some time because they have been badly burned.

Iranian President Hassan Rouhani spoke of a bitter tragedy ' '. He has ordered an investigation to determine the cause of the accident to quickly top table