Home / World / Train back to Brussels-Central 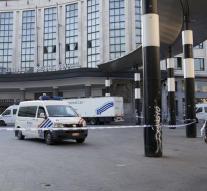 brussels - The train traffic to and from Brussels-Central will start again on Wednesday. According to the SNCB transport company, trains run again from 08.15. The station has now been opened for travelers.

The station was evacuated on Tuesday after a man had taken a suitcase. He was then shot down and died. The trains then left the station but did not stop.