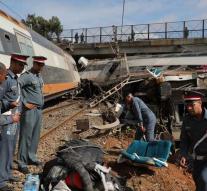 rabat - The accident with a passenger train last week in Morocco, which killed at least seven people, is probably caused by too high speed. The justice system in Morocco announced this on Tuesday.

The vehicle drove more than twice as fast as allowed when it derailed north of the Moroccan capital Rabat. The driver of the train has been arrested. Research has shown that at the time of the crash, he drove 158 kilometers per hour where 60 kilometers per hour were allowed.

125 people were injured. The derailed express train was on its way from Rabat to the northern Kénitra.