Home / World / Trade in rhino may again in South Africa 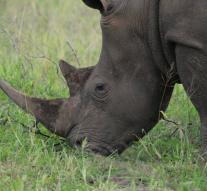 johannesburg - Domestic trade in rhino horn may again in South Africa. Since 2009 was subject to a ban, but that's Thursday by the supreme court abolished in the country. Which ruled that the state had not followed the correct procedure when setting up the ban.

The ban was one of the government measures to counteract hunting rhinos. Poachers pose a growing threat to rhinos. In South Africa, home to almost 90 percent of all African rhinos. The poachers benefit according to animal welfare organizations especially from the growing demand from Asia for products made from the horns. Which would arouse lust.