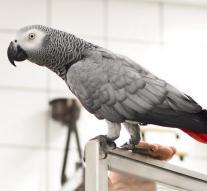 The African gray parrot is one of the most traded birds in the world, was already on the CITES list of endangered species, but there should still be handled with authorization. Because this is the country where the birds occur can hardly be maintained, it was decided to ban the trade altogether.

The bird was formerly in a large area in West and East Africa, but in recent years greatly reduced in number. Only in Ghana is the number since 1992 fell by more than 90 percent, according to research.