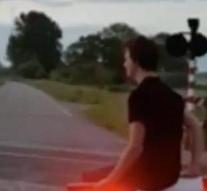 rotterdam - The boys who drove to the railroad tracks in the Frisian Mantgum and made a video that they put on the internet, reported to ProRail and expressed 'deep regret'. One of the boys has called and we have his data, according to a ProRail spokesman on Monday.

It's about two boys of sixteen and seventeen who were hanging on the track and an eighteen-year-old boy who filmed them.

On the video it was seen that two boys hung on the tracks, pulled down and then sat down. The bells and flashing lights started to work. ProRail, who reports to the boys, will investigate whether the mechanism is damaged. Any damage will be made to the boys.

According to Prorail, they are 'shocked by all the attention that has generated their deeds on social media. The perpetrators express deep regret and see that their behavior has been inadmissible. 'According to the boys, the video was already one and a half months old and only later on the internet.

ProRail says many comments have been received on the internet-shared video. 'You can see on social media that people are very outraged,' said the spokesman, indicating that such dangerous stunts are a violation of the Rail Act.

Recently, a teenage accident happened to Elder two teenagers. The seventeen-year-old boys would be attacked as they walked over the track.