Home / World / Trace of vandalism by Florence: 200 people in trouble 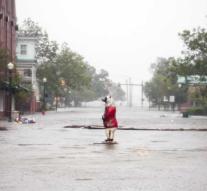 wilmington - Hurricane Florence leaves a trail of vandalism in the United States. Because of the storm, trees are blown away and streets run under water. In the city of New Bern, according to CNN, at least two hundred people were saved who had been in trouble because of high water.

The authorities have not yet reported any victims. Sixty people had to be evacuated from a hotel in Jacksonville, where the roof had partially collapsed due to the strong wind. There were rooms under water.

More than 634,000 households and businesses in the states of North and South Carolina are now without electricity.

The storm landed in North Carolina on Friday. Governor Roy Cooper warned at a press conference that the situation is 'extremely dangerous' and 'even worse. 'He stated that the natural violence can last for days. Meteorological service NWS predicted that in two or three days the amount of precipitation can be expected that normally falls in eight months.

The government had called on over one million people in coastal areas to evacuate in time. In the two Carolinas, according to the news channel, some 26,000 people have sought refuge in shelter centers. Others decided to leave the bad weather at home.

'It's insane,' Kevin DiLoreto from the coastal town of Wilmington said after a tree fell on his house. He told by telephone that blown trees block all roads to his neighborhood. 'Everyone laughs at the fact that the storm has gone down, but I have never seen so many destroyed trees. '

The seven-year-old Maysie Baumgardner, who hides with her family in a hotel in Wilmington, said she was 'a bit scared'. 'But I have my iPad and I watch Netflix. '