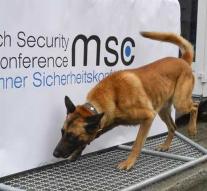 munich - High visit the next few days in Munich. World leaders talk about this at the annual international security conference. Our Prime Minister Rutte is there, but also the Russian Minister Lavrov (Foreign Affairs) and the British Prime Minister May. He spoke about the brexit on Saturday and about future cooperation with the EU.

Among others UN Secretary-General António Guterres, Sheik Tamim al-Thani (Qatar) and Ukrainian President Poroshenko will give a speech on Friday. Mark Rutte joins a panel on Friday evening and a breakfast session on Saturday. In addition, he has a number of bilateral discussions. Minister Ank Bijleveld (Defense) holds a speech on biosecurity on Saturday and speaks with a number of foreign colleagues. On Sunday it is the turn of Prime Minister Netanyahu (Israel) and some American senators.

It is the 54th edition of the conference. At the three-day meeting more than thirty heads of government and heads of state, more than a hundred ministers, and countless high-ranking soldiers and civil society and business people exchange ideas about international security issues.

On the program many panel discussions, including under the heading Fireside Chat (chat at the fireplace), but with for example Christine Lagarde, director of the International Monetary Fund.

For example, in a small setting there is talk about the Sahel, about jihadism after the caliphate, about the countries 'between Russia and Europe in' and- Saturday night very late- under the heading of a nightcap session: where should we lie awake at night. This meeting is off the record and only for participants, the program mentions.