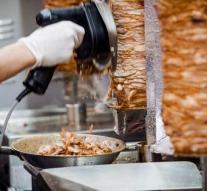 - Nineteen tourists, including five Dutch, became very ill in Berlin after eating a kebab. The emergency services had to come to bear in order to bring the tourists to a hospital, police said Thursday.

Nine people were eventually included. The kebab place is closed, the operator is suspected of negligence, abuse by negligence and breach of the Food Act.

The tourists were on Wednesday night after eating the snack quickly unwell. Besides the five unfortunate Dutch was about fourteen refugees living in Hesse and visited Berlin. Who should stay exactly in the hospital is unknown. The meat from the kebabs tent at Potsdamer Platz has been seized.