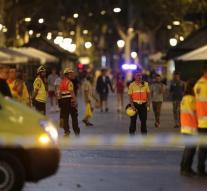 barcelona - At the Hospital del Mar in Barcelona this morning a German tourist of 51 died of her injuries that she suffered during the attacks on the Ramblas. That has announced the Catalan Ministry of Health.

With this the death penalty of the attacks will be 16.

There are still 24 injured in the hospitals after the attacks of 17 and 18 August. Four of them in Cambrils and twenty in Barcelona.

Five of them are in critical condition, four are seriously injured and fifteen light-wounded.