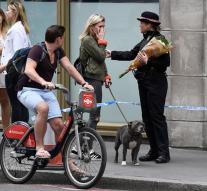 london - The attack that killed seven Londoners or tourists, which is not clear yet, is hardly twelve o'clock, yet life in London largely resembles that of a normal Sunday. Sunday is the most important tourist day. They use the beautiful spring sun to do exactly what they would normally do: take a cruise on the Thames, a hop-on-hop-off double decker ride or visit the Giacommetti Exhibition in Tate Modern.

However, not everyone has hit it. Andrea and Jose from Spanish Seville are visiting Julia with their daughter in London. They want to visit the Monument, the memorial built by Christopher Wren to the Great Fire of London when the entire city was almost wiped away. The tower that is one of the ways to the imagination of daughter Julia is close to London Bridge. Too close. A friendly agent explains that the building will remain closed throughout the day.

But then the travel advisor arrives in the agent. 'Have you seen the Science Museum already. It is located next to the Natural History Museum. It is a subway ride but both are excellent museums for children. And they are free. 'The Science Museum appears to have already been on the program, so the agent's annex advisor will assist with the nearest open metro station.

Now that the place of evil has been closed and has not yet become a pilgrimage for respecters and florists, the attack is especially an inconvenience. You can not go to the city anymore, a major part around London Bridge will be closed.

But London is big and most people do not let their pleasant weekend of London just down. A single looks worried about the dark clouds that appear above the city. Those could disturb Sunday. Probably more intrusive than the attack that seems, as it seems, as an unpleasant interruption of what a wonderful weekend is shaken by most visitors from them.

During lunch in a pizza bag I follow the conversations around me in French, German and Spanish. I do not speak any of these languages, but good enough to hear that the recent attack is not mentioned, but what is on the program this afternoon. The tourists seem to accept the motto of the English: Keep Calm and Carry On flawlessly.