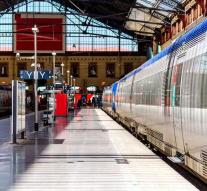 marseille - Four American tourists have become victims of an acid attack at the Saint Charles Charles de Gaulle train station in Marseille. The women around 21-21 years were injected with hydrochloric acid in their face. A woman is detained by the police.

The young women were on their way from Marseille to Paris when they were attacked. According to local media, women have burned in the face of the attack.