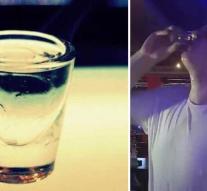 zante - Sambuca, a well-known drink among people who sometimes make the city unsafe. A British tourist has been declared a real 'legend' after he sank thirty shots of the anise liqueur in a bar in the Greek town of Zante within one minute. On a video you can see that the 20-year-old Chris McAdam drinks the shots one by one and throws his last shot glass in a bin after 59 seconds.

Chris tells The Sun that he was challenged by the bar staff. 'If I were to take on the challenge, I would not have to pay the bill. '

During his 'minute of fame', Chris seems to have a hard time with the taste of the shots, but picks himself up and drinks his last shot just in time. 'I had to surrender a few times that night, but at home I often drink Sambuca, so I knew I could handle it', says Chris.

The video on which Chris drinks the shots has been viewed thousands of times.