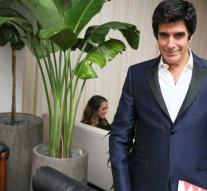 las vegas - Illusionist David Copperfield does not have to pay compensation to a man who was injured during one of his tricks. An American jury ruled that Copperfield is not liable for the incident in 2013, reports the newspaper Las Vegas Review-Journal.

A British man had dragged Copperfield, the illusionist's company and others to court. The tourist would have suffered brain damage when he voluntarily participated in a disappearing trick in Las Vegas. He fell when he had to hurry through a dark escape route after his 'disappearance'.

The lawyers of the defense argued that the British exaggerated the seriousness of his injury. They showed the images showing how the man could run without help outside the court, while in the building he was supported by family members. 'He has been caught,' concluded a lawyer. 'He calls everything in court. '

The tourist thought the trick was dangerous. Three women also stated that they had been injured during the show. The jury stated that Copperfield and his company should have investigated previous falls better, but still judged that the Briton is responsible for his injuries.