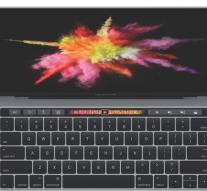 - Where competition stops at the line touch screens in desktops and laptops, Apple chooses to rest only tablets and smartphones with a touch sensitive screen. Marketing boss Phil Schiller shows in Backchannel know touchscreens 'ridiculous idea' for fixed computers and laptops.

Schiller says Apple touchscreens has been tried in MacBooks and iMacs, but that it led to frustration each time. According to Apple veteran is not convenient to have to move your arm to monitor if there is a keypad between. In a laptop is that distance perhaps incalculable according to Schiller, but he adds that a mouse and keyboard on a laptop much more value than a touchscreen.

Apple recently released laptops with a touch-sensitive strip on the keyboard. The TouchBar adapts to the programs that open the user to his or her MacBook Pro.