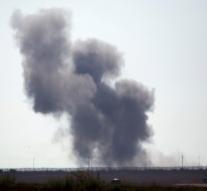 - An Egyptian ' topterrorist " Ashraf Ali al- Gharabally, who belonged to a group of jihadists in Sinai, was shot dead by Egyptian security forces in Cairo. That the Interior Ministry announced Monday. When Gharabali was slain is not listed. He was a leader of the Wilayat (province) Sinai.

That is a group of jihadists in the Sinai, northeast of Egypt. The group claims to be part of the movement Islamic State and has claimed to be responsible for the crash of a Russian Airbus A321 over the Sinai on October 31st. This brought 224 people died.

Kharabali, according to authorities in Cairo committed several attacks, including in 2013 by the then Minister of the Interior, Mohamed Ibrahim. He also made an attempt to commit a bomb attack on a temple in Luxor. He would also have been responsible for the kidnapping and murder of a Croat, last year at an American engineer in the Sinai.