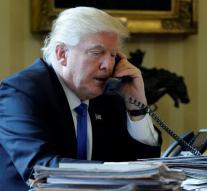 moscow - A meeting between Russian President Vladimir Putin and his US counterpart Donald Trump is according to the Kremlin in the pipeline. On possible agreements is not much to say, but the meeting could take place before the G20 summit in July, said Kremlin spokesman Dmitry Peskov Monday.

Trump and Putin spoke to each other Saturday over the phone. According to Peskov were not discussed US sanctions against Russia. Well ' we saw a willingness to solve tricky problems through dialogue, where President Putin has asked a long time but never had to answer in recent years. '