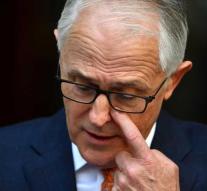 sydney - The boss and chairman of the Australian public broadcaster, Justin Milne, resigned on Thursday after a scandal about an e-mail sent instruction to director and editor-in-chief Michelle Guthrie. Milne sent, according to publications from The Sydney Morning Herald in May, Guthrie the assignment to get rid of two journalistic employees, Emma Alberici and Andrew Probyn.

The ABC chief would have said that the conservative then prime minister of Australia, Malcolm Turnbull, had complained about them in detail. In the mail about Alberici, according to the Herald, 'she hates her, you have to get rid of her, we have to save the ABC, not Emma. '

Milne, in his own words, has cleared the field in the interest of the broadcaster, but he contradicts that once a government official has insisted on the dismissal of employees and that he would have followed suit.

Last Monday the Guthrie administration suddenly sent the lane, without giving any explanation. Guthrie was publicly baffled about her resignation. Many commentators thought that her departure was a consequence of the recent appointment of a new prime minister.