Home / World / Top Gear from May back on British TV 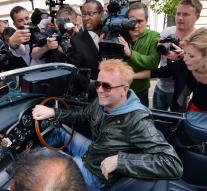 london - The popular car show Top Gear is on May 5th back on British TV. That is the new presenter Chris Evans Saturday let slip in the BBC cookery program Saturday Kitchen.

Evans succeeds Jeremy Clarkson, who had to step down after he had beaten a producer of the program. Clarkson 's secondanten Richard Hammond and James May also stepped up. The trio now go into 2016 a car program for the internet giant Amazon.

According to Evans, the recordings for the new Top Gear in full swing. Who are his fellow presenters, is not yet known.