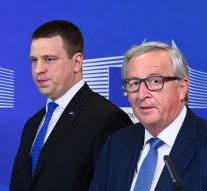 tallinn - A top conference on the future of the EU will be held at the end of September. The Heads of Government of the Member States and the European Commission are invited to discuss the digital strategy in Tallinn, which is not about 'tomorrow or the day after tomorrow, but it must reach five, ten and fifty years after,' said Estonian Prime Minister Jüri Ratas on Tuesday His parliament.

Ratas pointed to Estonia's reputation as 'e-country'. No EU Member State is digitized as this Baltic Sea. 'Our reputation is apparently so strong that we are expected to deliver an' e-Europe 'within half a year,' he joked.

According to Ratas, a well functioning digital single market would add more than 400 billion euros to the economy and create hundreds of thousands of jobs a year in the EU. 'Europe must act quickly not to get behind. One of the conditions for success is free data traffic. '

Estonia is six months from 1 July EU Chairman but the conference is not a formal EU summit.