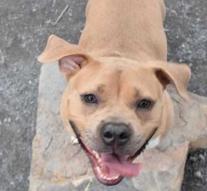 fulton county - You often hear that people who remove a dog from the shelter bring back because the beast is too difficult. But have you ever heard of a dog that is being returned because the animal is too sweet?

It happened to the cute hairy friend Helena, a cuddly dog ​​of about four years old. She was recently sent back to Fulton County Animal Services in the US state of Georgia. According to her new owners, the creature was too nice and she only wanted to cuddle, wrote the adoption organization on Facebook.

'Yes, she was really reduced because she was too nice. It was clear that the owner was more looking for a watchdog ', says Karen Hirsch LifeLine Animal Project. 'It is clear that Helena wants a lot of attention. It would be nice if she could find a family where she would be showered with love ', said Hirsch, who hoped she would soon find a house where her cuddling would be appreciated.

Through Facebook, the shelter went looking for a new owner for Helena. Fortunately that was found quickly.