Home / World / Too hot at Phoenix airport for aircraft 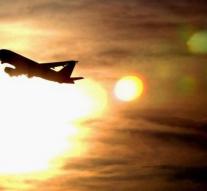 phoenix - At Phoenix airport in the state of Arizona, heat can not take off airplanes. About 40 flights have been canceled.

Up to 48 degrees smaller aircraft can take off. As the temperature is even higher than that, it is not safe for aircraft to leave.

Especially regional flights have been canceled. It is expected that Tuesday will be 49 degrees in Phoenix.

As the temperature rises, the air density decreases. For aircraft it becomes more difficult to get up.

Until Saturday, the southwest of the United States has a heat wave.