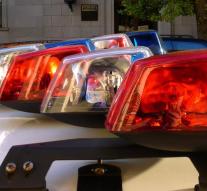 carrollton - Twins of 15 months in Carrollton (Georgia)- about 50 kilometers west of Atlanta- died in a sweltering car. Presumably, the father of the two girls thoughtlessly left in the car.

That report local media in Georgia.

Local residents discovered the two in the car and tried to cool the girls with ice packs in a swimming pool and CPR. The twins did not respond to resuscitation attempts and was pronounced dead on arrival at the hospital.


The mother was not home, the father was taken into custody for questioning.