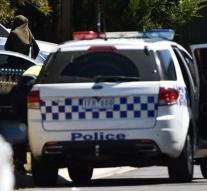 sydney - A three-year-old girl in Australia deceased after two hours stuck in a red hot, closed car. During the tragedy Saturday was the vehicle in the driveway of her parents' home in Sydney where it was about 30 degrees Celsius at the time.

When she was finally discovered, she had lost consciousness. She later died of a heart attack in the hospital. Was probably a misunderstanding between family members about who would watch caused the toddler in the car was left on the child.